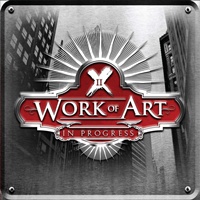 WORK OF ART – In Progress

This is the kind of album longtime AOR fans dream of. Bright, hook laden keyboards, streaming guitar lines, a firm rock ‘n roll bass and drum tandem and then vocals that bring home all of the lyrics in a mammoth, harmonious nature. This Swedish trio (vocalist Lars Safsund, guitarist/keyboardist Robert Sall, and drummer Herman Furin) make a study of the best elements of bands like Toto, Giant, and Journey to develop such an instant head bobbing, foot tapping 12 song record.

Robert Sall knows where to fly around on the frets with his electric chords and double up on the keyboards to maximize the listener’s appreciation for an arrangement- grabbing you with the first two tracks “The Rain” and “Nature Of The Game” so that you are eager to hear the follow up cuts. Herman Furin’s drum technique may not necessarily be the flashiest in the business- and yet it’s nice to hear a percussionist who is willing to play in the pocket for the sake of the song. And the cherry on top of an already fulfilling lineup is Lars, who proves he can deliver the highs with his metal work in the band Enbound but round out his repertoire with a smooth, easy going strength that the greats have in this genre- be it Steve Perry, any of the magnificent Toto singers through the years or the recent Scandinavian brigade.

“The Great Fall” as the first video track was an easy sell, but I believe the better material includes the “Raised On Radio” era feel of “Never Love Again” and the ode to a special female “Emelie” which even veers into older Richard Marx material as influence and inspiration. “Artwork” in 2008 hit the fences and stunned the melodic rock scene as many didn’t expect Work Of Art to be that good this early in their career. “In Progress” not only proves their validity and contribution to the scene in a major way, it solidifies their status as one of the best in this sub-genre.

Come on board and spread the word- Work Of Art set the standard for AOR/West Coast music in 2011.