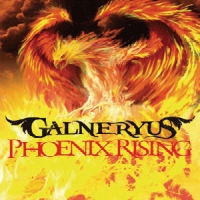 Virtually unheard of outside of Japan, Galneryus has over the last decade grown to a progressive power metal tour de force of international proportions. If ever there was a Japanese metal band that could break through in Europe and America it must be these guys. Why? Well for starters, the singer doesn’t have the stereotypical Japanese feel to him. You can still hear that this is a Japanese singer, but the melody lines and hooks are much closer to what would be considered palatable for European and American ears. Not to mention that the singer is technically brilliant. Just listen to “Bash Out!” and be convinced.

As for technical virtuosity, every member of the band is in world class. Not to compare to much to other bands, but to get the style distinguished I would say that the band sound something like a mash up between Angra and DGM. As far as progressive power metal goes I daresay that Galneryus wipes the floor with anything I have heard so far in 2011. The technicality is outstanding with fantastic high speed guitar magnificence in virtually every track. But the biggest improvement on “Phoenix Rising” as opposed to their earlier albums is the melodic content. There appears to be no superfluous material here what so ever. Every song make my closet power metal fan jump for joy. And this is a genre which very rarely raises even a single hair in my eyebrow any more.

If you can live with falsetto vocals, and high speed gallops in moderate proportions, this should be a band to check out. There is still enough Japaneseness in this band to make them stand out from the progressive power metal hordes in Europe and America. It is also a nice touch how the band have chosen to use Hammond sound for much of their synth work instead of the usual 80’s hair metal synth sound that so many prog power outfits have an unnatural fetish for. If you are a hungered out power progressive metal head who find it frustrating how little new blood arrives at the scene, that is new blood worth the time of day that is, then Galneryus should be the next stop in your search for sonic virtuosity and original approaches to an already used up formula. Check it!