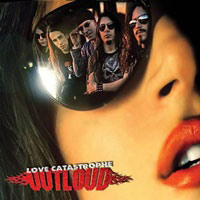 The second album from this Greek melodic hard rock band Outloud continues the fine songwriting and performances put forth on their 2009 debut. Featuring Firewind keyboardist Bob Katsionis performing double duty with guitars, the rich, expressive voice of Chandler Mogel leads material like the energetic “Live Again”, the Riot-like “Underground” and restrained ballad “Someday” to heights of the best in their sub-genre.

The opening single “We Came To Rock” just has that infectious good time party riff and atmosphere a la early Sammy Hagar meeting up with any of a number of Los Angeles 80’s bands- proving good musicians can keep things simple and effective. The follow up “Falling Rain” is mid-tempo in nature, allowing drummer Mark Cross a chance to lead the groove charge and Bob bring up the speed licks in the neo-classical solo part. I do believe there are times where some of the harmonies are a little too sugar sweet for the music on display- as the chorus to “Waiting For Your Love” that opens the song could be a tough sell for many of the macho rockers as it’s straight out of “Intuition” era TNT days.

Keyboards on “Love Catastrophe” seem to be used for filling in gaps rather than leading the arrangement, the notable exception being the slightly modern sounding “Isolation Game” where the effects provide shades of light and darkness with the different tones from opening to verse to chorus. When you listen to these 10 songs you can almost close your eyes and believe you’ve re-entered the late 80’s and early 90’s scene- pre-grunge and when MTV plastered hard rock all over at all hours of the day.

One for the ladies and the gentlemen- Outloud appeal to a more radio-friendly crowd who live for harmonies.