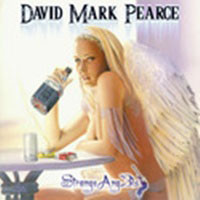 This UK guitarist has played with Yes keyboardist Oliver Wakeman in the Oliver Wakeman Band since 2002, and through the years gained experience in a number of domestic folk and melodic rock groups. David Mark Pearce believes 2011 is the right time to unleash a debut solo effort, surrounding himself with major players like vocalists Goran Edman (ex-Yngwie, John Norum) and John Payne (ex-Asia), Lisa LaRue on keyboards, C S Brown on bass and Mikael Wikman (ex-Vindictiv) on drums. “Strange Ang3ls” focuses on big, harmony-laden vocals, easy to understand guitar parts and a rhythm section built for melodic hard rock.

“Tell Me Why” even features Oliver Wakeman in a trade off keyboard solo situation with David, a natural single selection with it’s radio-oriented bigger than life chorus and the mid-tempo emotional bluesy tone from Goran’s stellar pipes. “Every Time It Rains” is a close to 7 minute instrumental, giving the listeners a chance to hear all aspects of David’s guitar technique, be it Ritchie Blackmore note bending, Joe Satriani-like landscapes through to neo-classical maneuvers over a rather serene arrangement. “Save Your Prayers” bring John Payne back to his classic time in the 90’s with Asia, while Lisa’s keyboard accents are straight out of the 80’s AOR school.

Overall this album will probably appeal to more of the guitar hero crowd, yet even with all this star power I don’t think the basic songs have strong enough musical power to really set this record in the class of say Mr. Big or Night Ranger this year. A weak drum sound also puts “Strange Ang3ls” into slight boredom moments- the ballad “Eden Is Burning” the best example as the snare and bass drum are rather weak and lessen the impact of Goran’s high note holding.

I find in this genre you can assemble the greatest musicians for hire, but ultimately the songwriting remains king- and David Mark Pearce needs a little more vision and insight to lift his next effort as this one doesn’t have the hooks necessary for years of enjoyment.

UNHOLY – From The Shadows