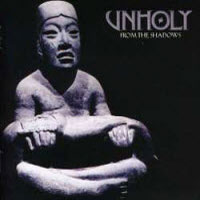 UNHOLY – From The Shadows

Unholy hails from Finland, and "From The Shadows" was the band’s debut album back in 1993. The band left the music scene in 2000 due to contractual problems, but Avantgarde Music, who had the rights to the releases, sold these to Peaceville Records, who now are re-releasing all 4 full length albums.

"From The Shadows" is labelled avant-garde death/doom, which is pretty much a spot on description. The music is slow and heavy, with tons of dark atmosphere, and although there is a certain raw and unfinished feel to it all, it really shows the bands potential and vision. The vocals are more or less dark and evil, but they also use clean vocals here and there, and some of these moments are pure magic. This is my first encounter with the band, but the debut defiantly makes me want to check up the rest of the discography, to see how they have developed from album to album.

I checked the band’s website, and there are rumors that Unholy again is active and doing music, but the band has denied these rumors all the time. However, there are now serious discussions about reunion, and this might take place sometimes in 2012. If you are not already into this melancholic and extreme band I recommend you to check them out, and if they decide to get together again and release a new album, it could very well be something to keep an eye out for. Check out the website, link below.

CRAWLER – Knight Of The Word