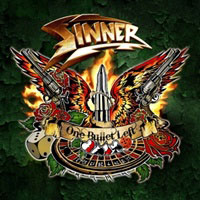 Recording in their fourth decade, Germany’s Sinner age like a fine wine with this latest, seventeenth album “One Bullet Left”. Life experience and global touring continue to give vocalist/bassist Mat Sinner and crew ample creative fire- and this time we gain the services of a triple guitar lineup to improve the power factor on these 12 tracks. One thing to respect about the band is the fact that they aren’t attempting to reinvent the genre they prefer playing in- you’ll be happy to know that this is down to earth power hard rock with the emphasis on lean hooks, easy to understand arrangements and melodies plus some ripping guitar solos.

Immediate cuts that connected with me include “Back On Trail”- the usual ode to Thin Lizzy that could have easily fit on “Johnny The Fox” with Mat channeling his best Phil Lynott voice, the rhythmic swing from the title track that sounds like a mix of Gary Glitter and latter day Gotthard, and the Accept-like mid-tempo riff thump from “Mind Over Matter”. The album ends on a more pseudo ballad front with “Rolling Away” – the melodies and main guitar lines reminiscent of Sunset Strip hard rock a la Dokken or latter day Y&T. Christof Leim, Alex Scholpp and fellow Primal Fear bandmate Alex Beyrodt give the listener a chance to hear some sweet harmonization against normal rhythm backdrops- and they don’t waste any time showcasing their skills on the opener “The One You Left Behind”. Drummer Andre Hilgers exudes professional class and even flexes his fill muscle on “Give & Take” which he’s known for in his other band Rage.

Much like Motörhead, AC/DC, and Running Wild, Sinner aren’t going to throw many curveballs at you from album to album. They know their style, they use their strengths to their advantage and leave all of the changes and riding trends to other musicians. For me this is the best I’ve heard Sinner play for an entire album since 1998’s “The Nature Of Evil”, and there should be a number of songs from this highlighting the live touring they’ll do in support of “One Bullet Left”.

Here’s hoping for at least another full chamber left in the Sinner studio catalog.