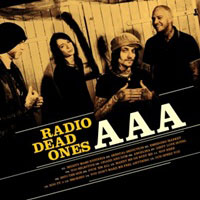 Berlin punk rock from the four piece Radio Dead Ones- who on their second album “AAA” have much in common with the UK movement of the 70’s and 80’s more so than any other particular inspiration. Although The Ramones “Hey ho” group chants reign supreme during “Too Selective”, the vocals of Beverly Crime have a lot of British spunk and swagger while the rhythm section of bassist Andru and drummer TV Mork inject a little bit of ska and hardcore into their normal 1-2 punk delivery on songs like “Cigars And Rum” and “You Don’t Make Me Feel Anything”.

The Clash meets The Damned comes to mind when taking in this 15 song record. Guitarist Rik Oldman actually has some skill at soloing against the main riffs, so it’s not all speed and burn material at hand. Lyrically the band tackle subject matter like the brutal effects of drug addiction in “Angelina”, personal stands of individuality for “Into The Sun”, as well as the struggles of relationships with “Not Here” that expand upon the normal rallying against the government/society word familiarity.

The great thing about this style is if you don’t like one particular track, within 2 minutes you are quickly moving on to another arrangement. Overall “AAA” will appeal more to the older followers of the movement rather than the latest generation who discovered Green Day as their gateway act. This second album gets the job done but doesn’t have the landmark mood movement that their mentors were able to achieve. As such, it comes into and out of my ears fairly quickly without damage.