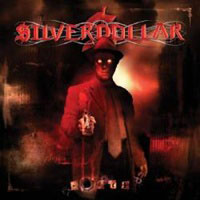 t’s always a good thing when right out of the gates following a political sound byte the second song “CO2” gives you hints of the early Memento Mori meets Memory Garden power/doom sound. And so off we go into the land of Sweden’s Silverdollar, a quartet hitting the scene since 1996 and transforming from a cover/ tribute act into a full fledge original metal band. Four years after their debut album the follow up “Morte” represents my initial exposure to these musicians, and I would say they exude a lot of the typical Scandinavian class and wide open influence grab bag to deliver a competent, confident heavy/power meets doom 12 song recording.

Drummer Mats Hjerp and bassist Fredrik Hall are a solid rhythmic machine, as the duo pump out thick sounds at any tempo- be it more mid-tempo power like “Evil Good” or conventional hard rock like the Dokken-esque “Hear Me”. Guitarist Ola Berg fills in all the gaps with a steady stream of riffing and soloing that showcases his love for everything from 70’s Rainbow to 80’s Candlemass to the current crop of domestic power/traditional metal outfits, his best work appearing on the aforementioned “Hear Me” (stunning neo-classical meets progressive solo) and the almost thrash-like “Raging Eyes”. Vocalist Esa Englund shines within Silverdollar because his chameleon-like delivery and charm matches the varied music landscape of the band- majestic and traditional on “Damage Done”, or shining like a classic doom crooner through the title cut.

Some believe too much variety spoils the overall picture of a group. In Silverdollar’s case, I completely disagree. “Morte” should appeal to the long time metal fan who savors 80’s music without compromise but also fans in general of classic European power- emphasizing the greatness of the genre. Raise your fist, show the sign, and air guitar away!