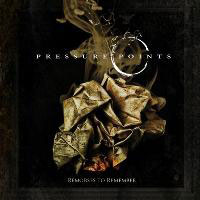 I don’t know why this band passed me by last year, but in these “Opeth-going-completely-retro” times, Pressure Points might just be the perfect remedy for those who miss the “Blackwater Park” era. It would be wrong to compare Pressure Points too much to Opeth though, they do have an identity and sound that is completely their own. Still, any fan of the mentioned Opeth era will definitely find this album a worthy adversary. Pressure Points do have great growling, great clean vocals, some 70’s influences and some influences from other extreme metal genres as well. I find the distinguishing of the sound/style on “Remorses to Remember” hard without giving the reader an actual listen, and that is pretty much the best compliment a band can get.

The first track “Atonement” is a melancholic metal anthem with riffing ala “Blackwater Park”, wonderful sad sung clean vocal lines… and sudden impacts of blast beats and synth work which reminds me of symphonic black metal. It might sound strange, but it works perfectly.

Next out is “Temptation for Hate”. This is the most aggressive song on the album, and it somewhat brings to mind In Morning and The Few Against Many. Once more the piece is dominated by Pressure Point’s own identity.

Third track falls somewhere in between the first and second in feel and mood. It has mid- to fast pace, technical riffing and more of the band’s refreshing progressive melodic compositional skills. The track is relived by a short acoustic piece before a more melancholic and slower piece takes over. Fifth track named “The Past Within” has piano, progressive rhythms reminiscent of straight forward progressive metal, and soul-filled guitar leads. I also think the vocal work really stands out on this one.

Next to last is another, calmer track called “Out Of Synch”. It is similar to its predecessor, though not undistinguishable from, and a fine transition to the final track “Grand Delusion”. This last track is a mid tempo groove monster that has lots of Opeth-like riffs and 70’s references. It is a perfect end of a near perfect album. Watch out for the Iron Maiden reference in the form of a double guitar lick midway in the song… awesome, unexpected and… did I mention awesome.

At first listen this album might appear bland, or similar to other Opeth-esque death metal acts, but I can assure that extended listening will reveal a band with a lot to offer for themselves. What is most impressive to me is how the band manages to constantly incorporate long instrumental parts that never divert the interest from the melodic vocal lines of the songs. The production and instrumentation is pristine. Given that this is the debut album from these Finnish guys, I see no other option than to reward them with top score. Had I discovered this album last year it would probably have been at the top of my list when albums of the year was listed.