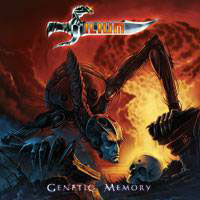 Australia struggles to gain metal credibility probably due to its remoteness in relation to North America, mainland Europe or even the Far East. So when you play a sub-genre of music like power metal, you better excel at your craft in order to gain an audience if you hope to increase your profile and improve overall sales. Enter Ilium – who have a leg up on the competition by securing the vocal services of New Yorker Mike Dimeo, which many of you know for his work in Riot and briefly in Masterplan. His first appearance with Ilium on their fourth album “Ageless Decay” is an impressive display of energetic power metal filled with numerous guitar harmonies and a classic arrangement landscape- building upon the already critical acclaim the band received with Lord Tim (Dungeon) fronting the group.

So it should be no surprise that “Genetic Memory” expands upon this initial union of high class musicianship and professional vocal abilities to possibly put Ilium into the mix for supplanting your latest Axel Rudi Pell or Iron Maiden records for killer hooks and this epic sense of mastery within the metal universe. Mike’s vocals on this album are forceful and urgent, not as smooth as Riot and a touch more aggressive with his conventional bluesy framework. Throughout the 11 songs the most notably quality that resonates with my ears is the attention to detail placed on the guitar work of Jason Hodges and Adam Smith. Whether contrasting in the main verses and riffs, harmonizing in the instrumental sections or soloing at will, these two know their way around their axes, and it’s a pleasure to hear their excitement pour through highlights like “Fevered Tongue”, “Grey Stains The Rainbow” and the epic 11 minute closer “Irrinja”.

Many may dislike the 65 minute play back from beginning to end, thinking that metal bands should really not tread beyond the 45 minute album like the old days. However, when there is enough dynamic interplay and resolute initiative to keep the songs moving along with excitement, you will feel like “Genetic Memory” flies by like “Reign In Blood”. Expert producer Tommy Hansen handled the mixing and mastering of this record- keeping it in line with the older natural sound philosophy.

Probably the best Ilium album to date. Very melodic, very powerful, just the right balance of heaviness and hooks that I look for out of this genre.