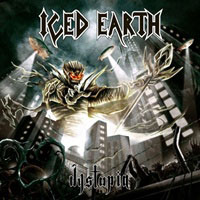 Crucial times for veteran bands in the metal scene. Especially mid-level acts who want to keep up with the digital times and make sure their costs get covered while consumers just aren’t purchasing as much musical product as they have in the past. Iced Earth over the course of their previous 9 studio albums have rode the storm of critical acceptance and scorn, especially for sticking to their power metal ways during times when thrash, death, and black metal were seen as much more relevant and cooler. What’s been tougher for this band is maintaining a steady profile with a rotating vocalist change every few years – Barlow leaves, Ripper Owens slides in for a couple of albums, Barlow returns – but only on a part time basis as the lure of family and a steady police force job limit his time for the road life.

Following Matt Barlow’s retirement from Iced Earth after the Wacken Open Air show of 2011, guitarist Jon Schaffer recruits Into Eternity’s Stu Block into the fold and the faithful wait with bated breath to hear if this man’s pipes will meld accordingly with Iced Earth’s rhythmic precise attack. Thankfully, this tenth effort “Dystopia” showcases more of a streamlined, in your face songwriting style that lays off the epic tendencies of their previous “Framing Armageddon” records. After a military march-like instrumental opening, Stu unleashes this sustained death scream signaling the new era of Iced Earth – and the title track travels with the potent Brent Smedley double bass barrage and familiar guitar strains we haven’t heard since the “Night Of The Stormrider” or “Burnt Offerings” time period for the group. “Anthem” is probably the biggest mid-tempo attention grabber for Iced Earth’s career, Stu delivering a forceful mid-range that synthesizes Barlow, himself, and a touch of Halford to send chills up my spine.

“Boiling Point” and “Days Of Rage” are two cuts under 3 minutes that prove the energy within the band hasn’t waned as they grow older – they still know how to punish with menacing, traditional riffs in that Iron Maiden meets speed manner. “Anguish Of Youth” gives the listener a more quiet, reflective song in the vein of “Melancholy (Holy Martyr)” or “I Died For You” from the previous Iced Earth discography – while “Tragedy And Triumph” closes the album with an Iron Maiden-like tempo change progressiveness. Once again another stunning cover and precise Morrissound Studio production illustrates Iced Earth’s commitment to not cut corners in giving their long time followers their all with these 10 songs.

Disappointments? Minimal – some of the choruses and musical refrains are a tad repetitive (“Dark City” comes to mind) and the people who purchase limited editions will get bonus material not included on the conventional release. In the end, Jon Schaffer should be proud of this incredible release – it will translate very well on stages across the world.