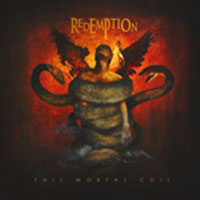 Progressive metal isn’t for the faint of heart or the impatient of mind. To indoctrinate oneself in the movement, be prepared to consistently defend your stance for the blazing instrumentation, the constant tempo manipulations, the often long winded compositions and vocalists who rise to the challenge with their own multi-octave vocal impressiveness. Guitarist/keyboardist and leader Nick Van Dyk tackles the up hill fight for consumer attention as fervently as his recent blood cancer treatment – gaining critical acclaim as well as noteworthy festival and touring opportunities over the course of Redemption’s previous four albums.

So what does the quintet have up its collective sleeves for “This Mortal Coil”, the fifth studio album and first with legendary producer Neil Kernon (Queensryche, Nevermore) behind the recording boards? Many who know Nick’s determination should not be shocked that it feels like this album has more fire and pushing of the dynamics than ever before – allowing drummer Chris Quirarte and bassist Sean Andrews to go full force on numbers like “No Tickets To The Funeral” and the nine minute plus exotic epic follow up “Dreams From The Pit”. Guitarist Bernie Versailles gets the chance to add his Bay Area speed/thrash touch to the mix of Van Dyk’s natural progressive history, even when the number is of a mid-tempo variety such as “Let It Rain” with its atmospheric keyboard opening and very serene verses, proving Redemption’s excellence at memorable songwriting across all meter avenues.

Yes we know that much of the lyrical outlook is one of strength and survival when you overcome life and death treatments to kill cancer – just peer into “Departure Of The Pale Horse” or “Stronger Than Death” for this personal picture coming to life. Redemption are able to make this even better due to the progressive expertise of vocalist Ray Alder – its as if he takes on the challenge and struggles of the disease for his band mate and friend and the melodies reflect the varied emotional landscape. His best work on “This Mortal Coil” would be the churning “Focus” – hitting home with me on the line ‘I want to live before I die’ the need for humanity to not merely exist but to actually seek activity.

At over 71 minutes, Redemption know they aren’t going to be a progressive band with this instantaneous appeal because these songs take repetitive exposure and deserve deep listening before landing in the thumbs up or thumbs down columns. To me this fifth record is the logical continuation of an already impressive discography for the band – encompassing four decades plus of progressive, thrash, and NWOBHM musical influences to create another landmark release.