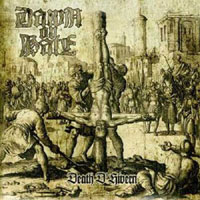 "Death d’Hivern" – whatever the fuck that means. Epic keys reminiscent of World of Warcraft, "screaming" guitars (make me want to put on some Judas Priest for the real deal) serve as the terrifying intro, then: boring black metal.

Here we have another band that doesn’t get it. Sounds like regurgitated early Dimmu Borgir. Not that it is all bad, but boring as fuck. Nothing outstanding here. At least the lyrics make for a good laugh… pro tip: Unless you understand what you are saying, why not just sing in your own language?

Goddamnit, if I wasn’t such a misanthropist, I might suspect that this is some kind of inside joke, since they serve so many clichés about black metal, from the really evil spelling of "ov" to the song titles: "Apokalypse 666" (note the "k" instead of the correct "c"), "Death-Exekution Kommando" (here they did it twice, how evil!!), "Hyperion, the Astral Fire" (gotta make something out of the Astrology spam, don’t we?) and the king (or rather queen) of them all: "Broken Wings for the God’s Bitch".

In order to support the band, I will not quote the lyrics themselves here, because they really are worth a chuckle (the cover art is kind of nice, too).