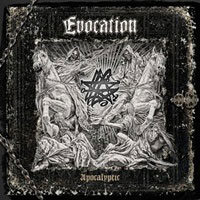 Evocation were there back in the early 90’s when Entombed, Dismember and At the Gates were carving out a sound that was to distinguish Swedish Death Metal for the following two decades, and not just as spectators. If contemporary reports are to be believed, the two demos they released in 1992 spoke of a potential that drew major label attention. Unfortunately, the band split in 1993 due to musical differences, so whether or not they would have had the impact of the bands listed above is a matter about which we can only speculate.

Fast-forward to 2007 and reformed Evocation release their debut album "Tales From The Tomb", hinting that perhaps this is a band who have something special to offer. This is followed by "Dead Calm Chaos" in 2008 and third full-length "Apocalyptic" in 2010.

"Apocalyptic" shows a band who are playing halfway between Gothenburg and Stockholm. It is instantly recognisable as Swedish Death Metal, but pinning down the influences and provenance is a little more difficult. The sound is chunky and heavy with the slightest melodic edge that is pleasantly familiar, yet original enough to make it fresh and relevant.

Years ago this was a scene I was really into, but I found it became too ‘samey’ and I lost all of my interest, meaning that these days I rarely dig out those old Entombed and At the Gates CD’s. Evocation is just the thing to revitalise that interest, thanks to its strong song structures, competent musicianship and a brick-solid sense of direction. For those who stayed loyal to the Swedish DM scene all along, I can imagine that it would be even more appealing.

The only place this release loses points is the fact that no matter how solid and well-produced it is, it still feels like an early 90’s release in terms of how Evocation approach their craft. Still, it is one of the most enjoyable DM releases I’ve heard in a while.