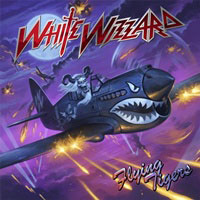 Combining the New Wave Of British Heavy Metal spirit with the fun loving, good time Los Angeles/Sunset Strip hard rock scene, California’s White Wizzard reach out to their steady, developing following with their second 12 song album “Flying Tigers”. Singer Wyatt Anderson returns for the second time, and unfortunately has left again due to the tenuous struggle between making music and making a steady living – something many in the metal business currently face head on in these economically challenging times. Hopefully bassist Jon Leon and his crew can solider forward with Michael Gremio (ex-Cellador), but in the meantime the band can proudly hold this effort high in their brief but productive discography.

“West L.A. Nights” incorporates a mid-tempo riff straight out of Van Halen meets Y&T school, while Jon pumps away with his Steve Harris-like bass at the forefront. The follow up “Starchild” is a traditional power ballad, the verses very sparse with clean guitar play while the chorus allows Wyatt to really open up in his powerful, charismatic Mike Howe meets Rob Halford range. I also enjoy the longer solo section, as Lewis Stephens and Cory Nagatoshi, along with Jon who does some rhythm and lead work in the studio, employ much of the same introspective, thoughtful logic when constructing this emotionally slow building lead break, much like the older Gary Moore, Michael Schenker or even “Remember Tomorrow” era Iron Maiden days.

Everyone in the traditional scene these days seems to have a song relating to the Far Eastern audiences who live for their guitar heroes and high pitch singers, and for White Wizzard “Night Train To Tokyo” is their fun loving tribute sure to get the right hand claps, chants and sing a longs when its aired live. “Blood On The Pyramids” is a short 2:57 burst of Egyptian-laden chords that would have fit well on either “Piece Of Mind” or “Powerslave”, and the 9 minute plus epic “Demons And Diamonds” will be one that Iced Earth maniacs love, so many different twists and turns from faster, almost speed metal sections to outright classic doom on this exemplary number.

Seasoning their sound on the road, this act could achieve the headlining breakthrough status that some of their European contemporaries like Wolf and Enforcer are currently achieving. Yes, the originality police would be calling at the number of Maiden-isms taking place between some of the harmonies and bass parts, but the conviction and construction of “Flying Tigers” wins me over every time. One of those albums that critics and fans alike will be referring to again and again as a crucial period in White Wizzard’s career – I hope they bottle this up and keep the magic alive.

IPERYT – No State Of Grace