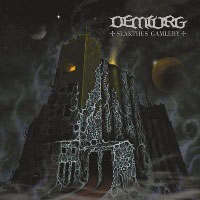 Demiurg (Swedish version) are something of a Death Metal superband with Rogga Johansson of Paganizer and Ribspreader on vocals and guitar, the legendary Dan Swanö on keyboards and lead guitar, Ed Warby of Gorefest and Hail of Bullets on drums, Johan Berglund (Ribspreader, The Grotesquery) on bass and clean vocals by Pär Johansson of Satariel and Marjan Welman of Dutch goth metallers Autumn.

"Slakthus Gamleby" is monolithic old school Swedish DM from the Unisound studios with great slabs of riffs powered along by throbbing bass and a fabulous, heavy drum sound. What makes this release different is the addition of keyboards which pop up here and there like the silver lining on a storm cloud. Added to that are the clean vocals, which although they are not used very often, lift the songs to a new level once they appear. At every step, the musicianship and production are so solid that you know you are in the hands of true professionals.

The question, then, is ‘Why does "Slakthus Gamleby" only score a ‘4’?’ Ultimately, no matter how polished a package this album is (check out the cool cover!), it still sounds like a reboot of something Entombed and their brethren put out 20 years ago. And, although it has those excellent clean vocals here and there, the direction and song-writing aren’t strong enough to make this an essential release. Given the sheer numbers of people putting out quality death metal these days (as far as I know, there are almost a half dozen working under the name Demiurg!) we, as listeners, can afford to be discerning and demanding and hold out for something better. It is a shame to say that about an album that is actually quite enjoyable, accessible and progressive, but that is the way of the world!