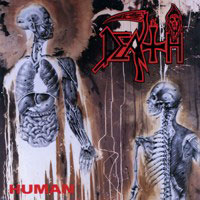 When "Human" was released I personally got my preceptor antennas up as something unique undoubtedly was a brewing. What I later realized was that this album marked the moment in time when Chuck Schuldiner transcended from being a mere musical mastermind to become a metal god. Everything released from here on by the late Mr. Schuldiner would be highly innovative, genre defining and instantly recognizable as the personal expression of one man alone, the godfather of technical death metal himself. If holding a predilection for later Death or Control Denied, "Human" is a must. To me personally this album carved the definitive signature style of Chuck Schuldiner in stone.

Compared to the three following albums "Human" is perhaps lacking in some aspects. But the definitive signature of later Death is clearly present her as well. The technical proficiency level is incredible. Each song has enough riffs to compose a whole album for any other metal band. The drumming is unbelievable and so trendsetting for future bands. Death was the foregrounding band for so many great technical death metal bands to come. Early followers would compile the awesomeness that is Atheist, Cynic and Pestilence. But the fact of the matter is that without Death, the genre would probably never have gotten the (limited) attention that lead to later evolvement of the genre. I thank Death for the existence of many an excellent tech death band in today’s metal scene. Obscura, Necrophagist & Into the Moat, are but a few band that I believe to be the natural developments of what was once constructed in the ingenious mind of Chuck Schuldiner. Not to mention Augery, Decapitated & Meshuggah who probably also have lent an ear to Death’s exploits over the years.

If putting the finger on something with "Human", it would be that I (personally) prefer the honing of Schuldiner’s personal style on later albums. I totally get if you might disagree with me on this one, but I must confess that I find the melodic content on Death’s last three albums to be a bit catchier than is the case with "Human". “Catchy” is of course a debatable term in Death context. The songs are never close to what would be considered radio friendly catchy. Not even what might be considered death metal catchy (as with for instance Cannibal Corpse or Deicide). Still, the melodies on later albums stick to my mind, when having heard the albums for the 150th time, whereas I return to "Human" mainly for the technical aspects of it. This is of course my own subjective attitude towards "Human". I know many hold this to be Death’s finest moment, and I do get that as well.

The sound on this reissue gives it the feel it has always deserved and should defend the purchase of the disc alone. The bonus material is purely for hardcore fans though. I don’t get much out of tracks without vocal or demo recordings. The adding of the Japan only bonus cover of Kiss’s “God of Thunder” is welcomed of course. I am a sucker for good cover tunes, but it is of course totally overshadowed by “Painkiller” from The Sound of Perseverance. Still, quite fun.

Weather you dig old school or new school Death, "Human" should be appreciated as it is marks the transcending moment between the two. If any of the tech death bands mentioned in this review are on your frequent listening playlist, Human should be acquired immediately. This is a technical death metal classic which should be a part of any serious metal collection.

VESPER – Possession of Evil Will