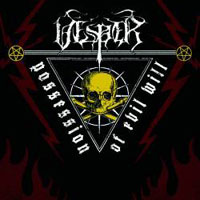 VESPER – Possession of Evil Will

My knowledge of the Italian thrash metal scene was limited to Bulldozer and Death Mechanism before I discovered this treat of an album released by Witching Metal Records at the end of 2010. We’re talking about a band that was formed in 2008, they named it Vesper and this is their debut album. From before they released a split with the Murk (Ita).

The style is dirty raw black thrash that reminds me of Venom, Aura Noir and Must Mista. The music is raw and dark and at times it sounds a bit unfinished and very 80s. Just the way I want my black thrash to be. The only thing I could have wished for is that the guitar came a little further upfront in the soundscape. The way it is now, it becomes almost muddy when the riffs are not high pitch.

Check out this band if you like dirty black thrash.

ICON IN ME – Head Break Solution