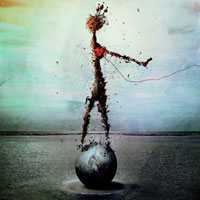 UNEXPECT – Fables Of The Sleepless Empire

I’m not going to deny that this is a much anticipated release, and I must admit that I was more than sceptic towards it, since their former "In A Flesh Aquarium" means so much to me. (read review of that album HERE). And it took me some time to break the codex within " Fables Of The Sleepless Empire". It is still not on par with their former release and let me explain why.

The new album is simply not as wild, crazy and consistent. Yes, the former one was consistent in the sense that it was all wild. The new one is more controlled and at times I feel that the craziness is more forced. Now, don’t let my subjective opinion (hah, can an opinion ever be objective?) let you down, because there is still plenty of food for the hungry. I mean, the opener with the bombastic approach, track six "Unfed Pendulum" (oh, what a fitting title) with it’s haunting development and the closer of the album "Until Yet A Few More Deaths Do Us Part" with the supreme ending, are more than a handful of tunes to deprive the listener of any comfort. Yes, these tracks and the album as a whole need multiple listening before it evolves into the album it actually is, namely a masterpiece of avantgarde extreme metal.

Violin, female vocals, a manifold of vocals going on at the same time, insane changes in the songs… What more can you ask for? In fact, Unexpect loose some impact when they try to write a song, instead of writing parts they sew together for the better good. Track two "Words" is such a song where I sit and wait for something to happen? And in the end it doesn’t until we reach the next one "Orange Vigilantes". I know, this is a problem that I own, since I want the craziness to take over the journey all the time. But I also see the point of slowing down and let things evolve. Did I tell that I’m not that patient, haha…?

Unexpect has created an album that grows on you, that holds enough material for several other bands and that is highly entertaining. The sound is impeccable, the music floats as it should and there’s enough spice to eat it again and again. It’s just that the surprise aspect is not on par with how I was awestruck by the former release. At the same time, the new album is not dissapointing. I mean, it’s more of the same and in the end it’s another hell of a ride…

UNEXPECT – In A Flesh Aquarium