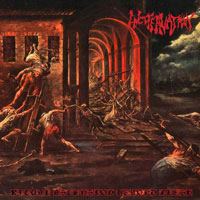 Doom metal is created for people with plenty of time, and I can’t talk big, since that’s something I neither have nor have had. There’s been very little doom metal for this guy over the years. U.S. band Encoffination has done something with this when mixing a good dose of death metal with the heavy funeral riffs on their debut album "Ritual Ascension beyond Flesh". It reminds me of the slower and heavier sections of their countrymen in Incantation.

The music is mostly heavy and a bit gloomy but sometimes they increase the pace a bit, lifting the atmosphere slighty from the doldrums. The lyrics are built on funerals and what happen to the bodies afterwards, but the vocals are so dark and incomprehensible that you will need the text in front of you to dig proper into the grim world of Encoffination.

For a person like me who has never been a huge doom fan, it takes a bit longer to get into the music, but I manage with a little extra will and effort. There are samples in advance of each track, which are probably intended to create an extra gloomy mood. But it rips me out of that dark world I finally got into, and I have to start over again when the next song starts. That is more annoying than anything else on this album. It is also perhaps the reason why I spent so insanely long time to write down my opinion. I do like it awfully well sometimes, while other times I struggle more with it and therefore I have decided that doom metal either do something with your mind, or it is your state of mind that determines whether you like doom or not.