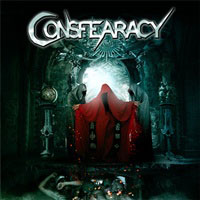 With the advent of affordable home studio equipment and sharing files through the internet, you no longer need to have physical proximity to develop a formidable band. What’s even better, as bands tour the globe they develop the seeds of jamming ideas with other musicians – and many handpick the best of the bunch without fear of anything less than professional performances. Such is the case with this U.S./European melodic power, slightly tech thrash quintet – featuring Brian O’Connor and Ira Black who previously played together in Vicious Rumors, plus Fabian Schwarz and Guenter Auschrat who play with the German band The New Black and rounded out with drummer Timo Weis.

Forming in the spring of 2009, a 2010 promo CD made the rounds and led to this deal with Massacre for their debut 10 song record. Overall Consfearacy load your ears up with a bevy of specialized guitar parts and double harmonies while the rhythm section pummels at a mid-tempo or above thrash clip – always keeping in mind hooks and melodies. Much of the songwriting takes on an early 90’s tact – where the players weren’t afraid to throw down that tempo change, high pitched note assault, or the shredding solo mechanics. “Live Again” has the low tuned passion of say Nevermore, but then in the instrumental sections brings early Forte to the forefront of my mind. Opener “Pain Infantry” and the faster “Forever Falling” possess a lot of that Vicious Rumors power metal base, especially in Timo’s double bass charge and Brian’s confident, soaring high range to keep up with the arrangements. Some of the best soloing occurs in the emotive “Unbreakable” where Fabian and Ira may send out a normal speed exercise during the song’s concluding moments but also wrench out every last feeling with the slower break in the middle.

Given the strength of recent releases from Vicious Rumors and Jag Panzer this year, do not forget about newer bands like Consfearacy who certainly offer a heavyweight, cross-pollinated sound that should appeal to fans of Forbidden and Heathen to the aforementioned Nevermore/ Vicious Rumors contingent. By the time “Your Dead To Me” ends the album, you’ll be yearning for a return engagement.