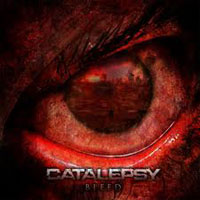 Okay, time to put away the asshole stick. This is great shit in the vein of All Shall Perish, which I love. But these guys are pretty original. I do hear plenty of Meshuggah and maybe some Acacia Strain, but the latter could be an aftershock from overexposure to Hate Eternal’s “Thorns Of Acacia” and “Phoenix Amongst The Ashes”, probably the most brutal album of the year.

But Catalepsy ain’t no Bon Jovi, either. This is brutal death core, in case you couldn’t tell from the cover. Well, it’s a superimposed eye that is really red like it’s about to bleed and I love it. It looks badass. But Catalepsy is not all brutality. “Faithless” has a great melody and the whole track reminds of Fear Factory. Could be because Catalepsy’s drums and guitars are often perfectly synchronized. “Monolith” starts with a machine gun. I know those are drums but credit on making them sound like M16A1 (and giving me a hell of a flashback in the process). I hear some Heaven Shall Burn influence on this one.

These guys definitely have a knack for riffing and melody, and the production is great to emphasize it. “Cthnonian” is fast and melodic, almost punkish in delivery with a little Ministry, very varied track, features some cool fills in the background. The title track made me think of Slipknot for some reason, but it has very original breakdowns and syncopated unique riffing, not to mention melody. I do think they rely on breakdowns a tad too much at times. “Infernal” is pure Meshuggah and the execution is deadly. “Static” sports a great opening riff, but at this point it all starts to bleed into one a little (thus 4.5 and not 5), so “Consumed” breaks the monotony with fast hard core bit.

Despite often monotonous breakdowning, I’ll take these guys over Meshuggah for more variety. “Vexation” reminds me of Misery Signals, a criminally underrated very original metal/core band. Pretty cool tune, actually. Again, melody is inserted just when things start to get a little stale, and not just one. Varied tempo also makes this one the best track on this album. It appears these guys also know how and when to tone it down and insert some harmonious balladry, just a little though, and then the guitar fades away, closing the album.

One of the Massacre’s standouts from the large pack I have yet to review, Catalepsy is one sophisticated, intelligent and mean motherfucker. It does not avoid all the trappings of a typical death core album, but the variety within and amongst the tracks definitely makes them stand out from the rest. Very well put together and all musicians know their craft. A little more variety within the songs and a little less breakdowns could make Catalepsy much better, although I like that I can hear the emotions pouring from this record. It’s angry, fairly original, evil, catchy, melodic and very oppressively heavy. This one’s a keeper.