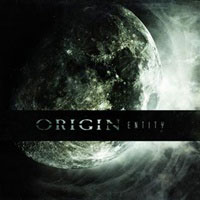 Topeka Kansas will never be recognized as a metal hotbed – but savage death metal group Origin calls this area home, and they’ve been maiming listeners since 1998 with their relentless arpeggios, squeals, blast beats and subterranean word bellows. For fifth album “Entity”, you get 7 tracks that don’t even hit the requisite pop music 3:30 standard (as “Purgatory” gets all the parts out in a mere 85 seconds), while two of the remaining four cuts come in over 6 and a half minutes, giving listeners of “Saliga” and “Consequence Of Solution” a chance to take small breathers amidst the cacophony of speed on all instrumental sides.

John Longstreth must lose 10 pounds through every recording session drumming with this intensity. Guitarist Paul Ryan and bassist Mike Flores provide background vocals to Jason Keyser’s dual screams and growls, and you can just imagine the neck breaking that occurs during live sets with this material. When they play 1000 mph and stop dead in the middle of an arrangement, you’ll feel the air sucked out of your ears and then chills coursing through your blood. This isn’t for the weak of mind or heart. Origin live for that knockout MMA move in the first 30 seconds of a fight – 36 minutes later you’ll be bruised, battered and blind-sided as those so called modern death metal bands quake in their shoes.

Cockroaches and rats may be the last insects and animals on the planet to survive – but for my money Origin’s brand of death metal will outlast them all.