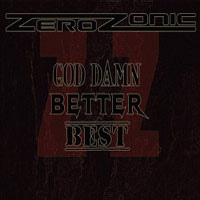 Zerozonic takes me back to my late teenage years, when Pantera was the heaviest band in my world. The production, the riffing and the vocals all sounds very Pantera inspired. The album kicks hard in my stereo, and if groove was all it took, then Zerozonic certainly has accomplished their mission. The songs typically turn from crunching bass/drum syncopations to Dimebag inspired sliding groove riffing. The solos are not half bad either.

However, "GD,BB" suffers from its lack of variation. Every song is in midtempo, and the melodies are not adding anything to the already exploited genre of groove metal. As such, Zerozonic reminds me of the later Pantera period, when the tempo was generally turned down and emphasis was put on groove completely. In this way Zerozonic beats the shit out of the already beaten to death horse.

I am not condemning this album completely, but the monotony makes me lose interest. If Zerozonic had a listen to "Cowboys From Hell" and derived their stuff from that next, I would probably be in heaven. Or hell, considering preferences. I think the time is due for an early Pantera retro band. I know that Norwegian band Breed are currently dwelling in that territory, but there are no bands to date that really captures what Pantera did on their first two albums. "Cowboys From Hell" might very well be the most frequented CD in my life altogether. A natural successor to what was done on that album, and I would be Zerozonic’s fanboy for life.