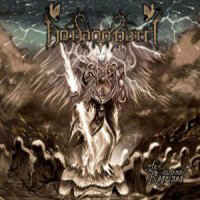 No Hand Path performs new school black metal with a touch of old school nostalgia to them. Their expression is not exactly retro-laden, but as far as black metal go No Hand Path don’t add anything to the table either. The package is professional for a self-released album. The artwork is sublime, particularly the cover booklet. The front cover could probably fit a power metal outfit as well, but it still is pretty cool. The music is straight forward black metal, with all its stereotypical elements. One string riffs over blast-beats, talkative evilness over acoustic strum chords in melancholic minor scales, and some bombastic war cry’s to vary the evilness.

The production is dirty, but could be defended as suiting the bands image. I am not convinced though. It should have been either more old school dirty on purpose to convince me that the dirtiness is real. A clinical production could also have suited the band, but it is hard to pull off a mix between the two production styles. To this day, the only band who has convinced me with dirtiness in a clinical guise is Hypocrisy. There you have a clinical production where each instrument is as clear as day, still it is as dirty a production as they come. ("Virus" in particular.)

The production isn’t No Hand Path’s biggest problem though. The problem is that everything is done so meticulously by the book. Each riff, each break, each melody line, albeit well executed, is hopelessly derivative and unoriginal. There is no identity what so ever on this record. I feel as if I’ve heard every little detail before. This could have been okay, however, if the melodic content was memorable, but alas, No Hand Path fail at this as well. The album is okay as an establishing step for the band, but if they want to survive in today’s harsh metal environment, they will have to improve on every aspect of their game.