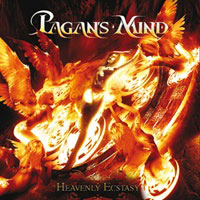 In earlier metal periods, the creative peak of a group would probably occur during the third or fourth album cycle of their career. It often takes your first two efforts to shed your influence skin and develop your thick coat of originality – and usually by album five artists are often stuck with broadening their horizons or the call for pumping out more of the same formula as fair-weather fans flock to a new trend. Progressive metal I believe is the one genre where musicians may need an extra record or a few years to solidify their vision and gather the best following in the process.

Pagan’s Mind started their breakthrough with their third album in 2005 “Enigmatic: Calling”, attracting the attention of promoters far and wide as they took an American-like technical approach a la Dream Theater and began to inject their European melodies and songwriting smoothness to manufacture their own style. 2007’s “God’s Equation” permanently squashed any more ‘clone’ comparisons for good with their heavier tones and their left field “Hallo Spaceboy“ David Bowie cover choice – so a four year wait between albums leaves my expectations quite high for “Heavenly Ecstasy” to give Pagan’s Mind the launching pad for upper tier veteran status.

After a short “Contact” intro, “Eyes Of Fire” navigates with that confident Queensryche-like charm, the piano and keyboard work having more of a dark atmosphere to counter attack the otherwise uplifting melodies and rhythms. “Intermission” rises as one of Pagan’s Mind’s best tracks to date, be it the peaks and valleys with the quieter bridge work or the fluid guitar work from Jørn Viggo Lofstad where he employs vigorous tapping techniques for the main solo and then punctuates the ending moments with a harmony solo that reverberates within my memory bank for weeks on end. As the rest of the eight remaining songs take over your listening device of choice, the five musicians remain steadfast in not beating their abilities into sonic excess – the forward thinking comes in with spurts of flurry, such as the “Operation: Mindcrime” era like “Walk Away In Silence” or the stair step rhythm riff manoeuvring against the Stian Kristoffersen drum mastery on the outstanding closer “Never Walk Alone”.

Nils K. Rue has all of the tools a progressive metal vocalist needs in modern music: tenderness, conviction, personality, and the multi-octave range to pull it all together without overstepping any boundaries. I don’t think he really sounds like any one known singer in particular, as his style is an amalgamation of Geoff Tate, Daniel Heiman and a touch of Michael Kiske. For all sides of the vocal coin, check out the 8:32 “Revelation To The End” as proof of the man’s stellar talent.

The longtime followers will get this instantly – but this message is for the casual observer who believes no one can top the triumvirate of progressive metal acts : Dream Theater, Fates Warning, and Queensryche. Pagan’s Mind prove time and again not everything has truly been accomplished in progressive metal, and they do deserve a shot as kingpins in the genre based on their collective discography.