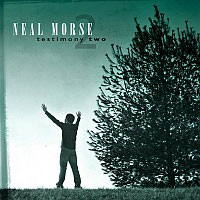 Neal Morse, the former front man of Spock’s Beard and lead anchor in the super-group Transatlantic is back with his 17th (!!!) release as a solo artist. The album “Testimony II” is a continuation of the 2003 concept album “Testimony”. The album, dealing with Morse’s new found faith as a born again Christian, consists of two CD’s, 16 tracks of soul felt prog rock.

The lyrics, working almost as a homage to his God can also be motivating for anyone in need of a friendly ‘pick me up’ from Neal Morse suiting voice. The trick, for anyone not prone to praying or singing in large congregations, is to disregard the potential religious aspect of the lyrics and just listen! Even though the album, apparently, is a testimony to Morse’s faith, the songs do not sound preachy (with some exceptions…). This is music anyone can listen to without ever knowing that they might be religious in nature.

The sound can best be described as drawn out, musical safe spots. The musical wonder-boy, Neal Morse, pumps out track after track of feel good prog, sure to get most people strumming their leg as imaginary guitars or bursting out drum solos mid air. While the epic potential of progressive music is still present, the inventiveness of the genre feels left behind. It’s good without being extraordinary. Some tracks, such as “Overture No. 4” will drift many minds to the likes of Dream Theater and keyboard wild man Jordan Rudess.

A quite noteworthy track is “Seeds of Gold”. While the music is impeccable, the rhythm jumping up and down like school girls in recess, the length of 26 minutes is probably longer than most people can handle. Without actually getting repetitive, it does seem stretched out and a bit put together by what could just as easily have been 3-4 individual songs. The length put aside it’s a very good track with touching lyrics and musical aspects certain to suit most ears eagerly waiting for progressive rock. A clear highlight of the two disk compilation. “Time Changer” seems to deal with Morse’s decision to leave Spock’s Beard and other projects he was involved with at the time and focus entirely on his solo career.