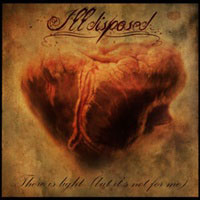 ILLDISPOSED – There Is Light (But It’s Not For Me)

Celebrating their 20 year anniversary as a band, Denmark’s Illdisposed release their eleventh studio album, the oddly titled “There Is Light (But It’s Not For Me)”. To refresh my memory regarding this death metal act I went back into my archives to give 2009’s “To Those Who Walk Behind Us” a few spins. The standout aspect of the group is Bo Summer’s low growl – it’s one of a kind in a European meets Cannibal Corpse fashion. Outside of that, this is fairly standard death music, with slight nods to the newer school in terms of keyboard accents or obvious Fear Factory-like breakdown sections (“Heaven Forbid” especially) .

Those who are indiscriminate with their death bands may have little to complain about on tracks like “Step Into My Winter” (with its undeniable drum stomp) or the circle echoing twin guitar lines that key the main hook of “We” – but to me Illdisposed are similar to thousands of other acts who rage, scream and pummel without really coming away with anything tangible or long sustaining. Sure its tightly arranged and sonically in your face, but over the course of 11 songs and 40 minutes I’m hard pressed to find one track that makes me want to return to this on a consistent basis.

When it comes to the straightforward, standard dealings of this genre, I’ll stick to acts like Disbelief, Grave and Unleashed and leave Illdisposed on the sidelines.