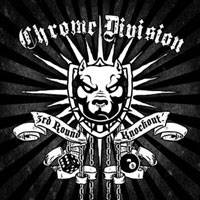 In today’s large music market, musicians appear to have let the creative floodgates open far and wide. No longer does one band or project satisfy their songwriting or performance cravings – the desire to unfurl as much as possible before retirement is only limited if the means (money and time) remains restricted. Dimmu Borgir vocalist/ keyboardist Shagrath also has a number of side bands, such as Ov Hell and this much more motorbike hard rock ‘n’ roll outfit Chrome Division. Following the departure of The Carburetors Eddie Guz, latest vocalist Pål Mathisen (aka Shady Blue) of Susperia brings his experience and fierceness to “Third Round Knockout”, their newest platter.

Do not expect deep lyric topics from Chrome Division: they love to discuss the art of the party and beer, booze, broads are they rock mantra. So expect tongue firmly in cheek when you hear tales of lust and debauchery within “Long Distance Call Girl” or physical combat in “Fight (Rumble And Roll)”, the latter featuring some stunning 70’s styled bluesy soloing. A lot of the material just has that 1-2-3-4 punch a la the greats, from Motörhead to The Ramones – such as the opener “Bulldogs Unleashed” and “Unholy Roller”. And the surprise cover Chrome Division pull out this time would be the Johnny Cash classic “Ghost Rider In The Sky” – including the cowboy gunplay accenting their sped up version (although the chorus takes a half-time tempo chop and you gain a dual harmony guitar solo).

These five gentlemen understand that there’s a time to be serious about music, and yet you can also have a good time while putting across the basics. As long as you understand Chrome Division aren’t out to revolutionize as much as just make your attitude point in the right direction after a long, hard work week, then “Third Round Knockout” registers an aural TKO for everyone who’ll take it on.

ILLDISPOSED – There Is Light (But It’s Not For Me)