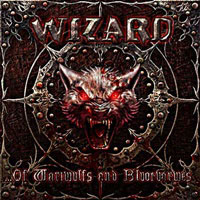 When you cut away all the extraneous atmosphere, the bottom line comes down to songwriting and performances in metal for me. Certain bands grab you by the throat with their intensity or immediacy- and other acts take a little longer to advance their following for the opposite, wide open spectrum of sounds they employ. Germany’s Wizard won’t confuse the majority as to which camp they belong with for their latest album “… Of Wariwulfs And Bluotvarwes” – especially when double bass and guitar riffs blaze hand in hand in true metal tradition right out of the gate on the opening title track.

Gaining lyrical inspiration from German author Andre Wiesler (a trilogy of books about vampires, werewolves and witches), the quintet fuel the words with potent riffs sure to raise fists in the air and alcohol through the body. Much like Accept, Mystic Prophecy, and Primal Fear, Wizard play in a manner where they float between faster, straightforward head banging material like “Taste Of Fear” and “Sign Of The Cross” and the slightly more mid-tempo meets epic approach such as “Messenger Of Death” or “Hearteater”. Vocalist Sven D’Anna has a multi-pronged vocal delivery, capable of soaring to Halford and Eric Adams high notes and also screaming in a razor sharp thrash manner depending on the arrangement and pacing of the song. The steady rhythm section of bassist Volker Leson and drummer Soren van Heek (who along with Sven have been with the band since its 1989 inception) keep this traditional train on course, never veering from their metal cause.

Rounding out the sound are twin guitarists Dano Boland and Michael Maass- both with the chops and knowledge to form a killer dual team who throw harmonies at will through “Undead Insanity” and know how to shift with the speed tides on closer “Hagen Von Stein”. Recording in their own Magic Hall studio and handing the mixing and mastering to noted metal producer Achim Kohler, “… Of Wariwulfs And Bluotvarwes” possibly eclipses the mighty “Thor” in terms of top to bottom energy and long lasting appeal.

Another great one for the leather, denim jacket and bullet belt brigade – nine albums in bands aren’t supposed to be achieving their studio peak and yet Wizard have with this 11 song platter.