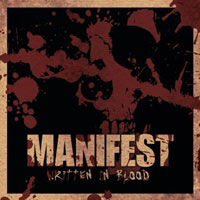 The third album of modern thrash with blistering underground ethics from a Norwegian four piece intent on giving you a punishing aural journey through these 11 songs. “Written In Blood” contains some wonderful progressive drum parts from Alessandro Elide on the intricate “They’ll Have To Carry Me Home” and then moves into mach ten overdrive on the follow up “Food For Flies”. Main vocalist Stian Leknes has a conventional gruff motor mouth delivery and then morphs himself into a slightly maniacal hardcore screamer when called for.

At some points on the record Manifest explore atmospheric horizons that give their main thrash style more substance and versatility – a little bit of Meshuggah off time in the guitar/ drum syncopation, the occasional odd ball VoiVod reference here and there. They also can throw down some down tuned mid paced doom on “Pitch Black Inside” that could go side to side with the latter day Crowbar material. And the visual created with the following lyrics from “Lullaby (Bedtime For Bastards)” can only come from the minds of a true thrash outfit: ‘Now a billion fireants / Gnawing at her soul’.

If you love the latter day thrash era with acts like Dark Angel or Sepultura, along with the European brutality aspect in terms of the caustic vocals, Manifest certainly ring the bell for an exciting, entertaining album. Understandable based on my initial exposure to the group how they’ve toured with Entombed and also played Wacken, Inferno and Hole In The Sky festivals through their career – Manifest prove they aren’t playing the ‘trend’ to be cool – they mean what they play and are true to their heads and hearts.