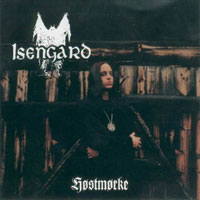 I actually own a copy of "Høstmørke"’ on vinyl, but I have never listened to it. I know, shame on me. Isengard was a solo project set up by Fenriz of Darkthrone in the late 1980’s, which began as a death metal project and evolved into a large mix of styles, incorporating elements of doom, rock, death, black metal and folk. "Høstmørke" was the second album, released in 1995, with all instruments once again performed by Fenriz himself.

What this has evolved into is one thing, and I have no problem recognizing the fact that this album probably is something many black metal fans look upon as classic or the real thing, old school, you tell me. But other than a pure historical album documenting what Fenriz did way back then, this has little or no value at all. Sound and production is terrible, and yes, I know this is something many people like and prefer, I don’t. The music makes me wonder if it all is just a big joke…, perhaps it is, only Fenriz knows. Not sure what to call it, but simple black metal performed by an amateur should cover it, add comedian black metal vocals, and you probably get the picture.

Holy grail to some, a joke for others, including me. The new edition also contains a commentary disc conducted by Fenriz, reflecting on the recording process, as well as an insight into the time of the recording. I’m not interested. Send me your address, and you can have it all. Including the vinyl…