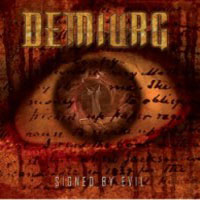 For the record, there are about a dozen bands out there called Demiurg or Demiurge. These guys are the Czech version, spelt without the ‘e’. They’ve been around for the last 6 years or so and this is their second full-length release.

The music on offer is death metal with a strong thrash influence, so you won’t find much in the way of blast-beats or lightning-fast fretwork. What you will find is lots of mid-paced chugging in the vein of early Death, but with modern influences too.

The production is workmanlike at best. At times the snare has that biscuit-tin quality that only Lars Ulrich could find appealing and the bass is a bit too tight and twangy to add much atmosphere. The guitar work is generally solid though, and the guys obviously have a good ear for a tune.

On the whole, this is an honest, likeable album with plenty of catchy if not memorable riffs and breakdowns. Although I don’t see these guys doing better than the second division, this is an album you could return to and enjoy and that’s got to be good.

DRUMS ARE FOR PARADES – Master