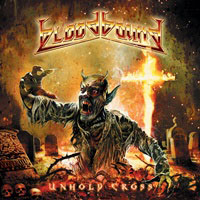 You might feel like you need a play by play scorecard with the vocal changes for Sweden’s Bloodbound over the past 5 years. Urban Breed’s in – Urban’s out. Michael Bormann takes over for album two "Book of The Dead". He can’t fulfil touring obligations – Urban’s back in for another go around on 2009’s "Tabula Rasa". The following year Urban once again steps out of Bloodbound – leaving the remaining five some with a choice to find someone with not just professional ability, but also similar personal interest and chemistry. Enter Patrik Johansson – who may be familiar to other traditional/power metal followers through his two albums with "Dawn of Silence". Big shoes to fill on album four "Unholy Cross" – but this critic believes they’ve found the right guy to solidify their power metal impact.

Never content to stay in one place with their style, "Unholy Cross" appears to be more of a ‘back to basics’ record for Bloodbound – with many musical similarities to their blazing "Nosferatu" debut album. Opener “Moria” with the mead hall male background vocals and the large, infectious guitar harmonies against the galloping riff backdrop that Tomas Olsson and Henrik Olsson takes their sound into comfortable pastures – along with less modern production tonality. Patrik’s natural range traverses the strength of a Bruce Dickinson along with the grace and personality of Tobias Sammet – evident in a mid-tempo anthem like “Drop The Bomb” just as much as the faster, double bass fueled “In The Dead Of Night” (with lead work rivalling the Helloween "Keepers…" saga years for the latter). Those who also miss Edguy circa the "Mandrake" or "Hellfire Club" album periods will dig the addictive hooks and commanding chorus on “The Ones We Left Behind” as well as the title track.

Even when the band decide to take the tempo down to ballad status such as “Brothers Of War”, the sextet create an emotional atmosphere in line with Riot or early Hammerfall which invites vigorous audience chanting, clapping or vocal interaction. The keyboards don’t play a focal point on "Unholy Cross" – these 11 songs are rich with British twin guitar influence along with the appreciation of the European power movement – while not sacrificing anything in terms of integrity or meaningfulness. Newest bassist Anders Broman forms a steady low end firmness with drummer Pelle Akerlind that keeps songs like “Reflections Of Evil” and “Together We Fight” bristling with energy, metal to the bone.

These guys haven’t made a poor album to date. "Unholy Cross" should not lose the Urban fans, and hopefully will maintain Bloodbound in the power/traditional game for decades to come.