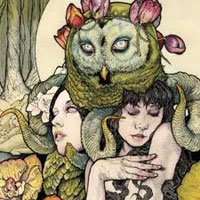 AGALLOCH
"Marrow of the Spirit"

THROES OF DAWN
"The Great Fleet of Echoes"

Must be Nummirock (Kauhajoki, Finland) once again. Quite small and intimate festival literally in the forest and by the lake. Warm atmosphere, some good bands (Venom, Six Feet Under, Sepultura etc. this year) and lots of great people. Basically everything that you could ask for a good festival.

The good year in Norwegian heavy metal. Excellent albums by Kvelertak, Solefald, Enslaved, Purified in Blood, and the list goes on and on.

Huh, seen shitloads of albums this year and can’t obviously remember all of them. Somehow the cover artwork of The Ocean’s "Anthropocentric" popped out on my mind first, so I think I have to choose that one.

That’s a difficult one! I have never been a big fan of some certain band, but if I have to answer something here, it must be Anathema. I also do adore bands like Enochian Crescent, Darkthrone, Solefald, …and Oceans, Katatonia, Horna, The Ocean, Insomnium and Throes of Dawn as well, so there’s a lots of great stuff to be found from metal music.