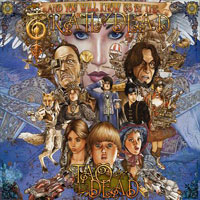 If you are looking for the most delicately orchestrated alternative rock you could ever imagine then look no further. …And You Will Know Us By The Trail of Dead do not simply make music, they create it as the guitars mixes casually with the drums while at the same time the voice of lead singer Conrad Keely belches out lyrics of death, despair and pretty much the end of the world. Still going strong after nearly 20 years as a band and with 6 studio efforts behind them …The Trail of Dead knew what they were doing while they recorded their 7th studio album “Tao Of The Dead”.

After a brief introductory noise indulged tune named “Introduction: ‘Let’s Experiment’” the album really kicks off right from the start with “Pure Radio Cosplay”. A track which quite efficiently displays everything you could possibly expect from an album from …The Trail of Dead. After “Pure Radio Cosplay” the album slows down quite a bit however for people interested in this form of music, it will only draw them in further as the songs have just enough going for them that you simply can’t refrain from being sucked in. “The Wasteland” is a perfect example of this. It’s a song that rises and falls in intensity but in never falls in quality. It is one of the albums clear-cut highlights.

While it’s still early yours truly is willing to bet that when the polls come to a close and all the votes are in for the best album of 2011 “Tao Of The Dead” by …And You Will Know Us By The Trail of Dead will be high on the list. Album highlights: "Pure Radio Cosplay", "The Wasteland", "Weight Of The Sun (or the Post-Modern Prometheus)" and "Ebb Away".