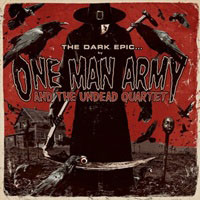 ONE MAN ARMY & THE UNDEAD QUARTET – The Dark Epic

The voice of Johan Lindstrand – former lead singer of Sweden thrash/death outfit The Crown – has established One Man Army & The Undead Quartet through the late 2000’s with three studio albums and great touring opportunities with Children Of Bodom, Soilwork, and Unleashed among others. Taking a couple of years to make some lineup changes and write a new album, "The Dark Epic" appears to keep the heavier thrash meets death sound at hand with only traces of melody present more from the musical side than Johan’s lacerating word spew.

Sometimes the guitar riffs stair step in classic thrash motifs, such as the assault from “The Zombie Syndrome (Of Acid And Man)” where Mikael Lagerblad and Mattias Bolander undertake up and down axe runs in line with older Testament and Exodus. Another dimension appears on the 8:47 title track – a mostly instrumental affair with slower, King Diamond-like power parts, the four musicians behind Johan rip through a slightly progressive doom arrangement where those who appreciate the art of shred will assuredly do hair windmills to this song. You’ll get paint melting speed on “Stitch”, traditional double bass death bounce the Swedish way on “The Pleasures Of Slavery” and a quick punk thrash hit and run ending with “How I Love To Kill You”.

One Man Army & The Undead Quartet are one of those acts you probably won’t have to worry about surrendering their souls for commercial airplay and mainstream acceptance. This is music from the heart, fueled by intense emotional outpouring and intent on kicking out all of life’s negatives and channeling the energy in a positive outcome of metal experiences.

Topped off with Jonas Khellgren’s Black Lounge Studios production values and obvious comfort with the band, "The Dark Epic" may be their best cohesive and dynamically versatile full length to date.