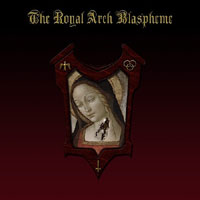 Oh boy, another USBM-band with N. Imperial on vocals! What a surprise! Seriously speaking, what makes this album interesting is that John Gelso, the Profanatica/Abomination/Contrivisti-madman has wrote the music and played all the instruments for RAB, so it’s not a wonder that I have an album full of strong and primitive death-ish black metal in my hands right now.

RAB’s music sounds exactly like what you can expect from these guys. It’s quite close to Profanatica, but probably a bit more straightforward (if possible) and fast with a stronger death metal touch. Some other bands that should be mentioned here are definitely Archgoat, Beherit and Von.

The Royal Arch Blaspheme try hard to be as blasphemous as possible and almost succeed in it. The music itself is very harsh but in my opinion the sound could be a little bit dirtier to capture the deepest essence of the music. It’s obvious that the music itself is raw enough to disgust the listener, but with more distorted and dirtier sounds the album could be even more effective.

The Royal Arch Blaspheme have made a decent debut album, but I’m sure that the best this band has to offer is still to come.