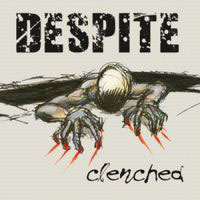 Quite a concept for 2011. Let’s record an album without triggered drums, computer editing or an over-produced sound – using equipment from the 60’s and 70’s. Sweden’s Despite follow up their 2009 "In Your Despite" debut with a second album of raw death/thrash – intent on keeping the energy factor on high and assuredly delivering something that makes the hair stand up on your neck and arms. Alex Losback Holstad fronts the quintet, moving up from his previous bass background with Decameron, Cardinal Sin and Runemagick among others to handling the charging throat abuse and does a monumental job of conveying pain, anger and frustration through tracks like “Bruised Machines” and “Commander Of Hate”.

When the band do settle into mid-tempo material, you’ll often get some strange concoctions of eerie guitar feedback strumming from Timmy Leng and Jonatan Larsson that mutes into a blast beat finale such as the one you hear in “God Of Flies” or the down-tuned groove madness not dissimilar to Obituary meeting early Machine Head during the follow up title track. Most of the material hits you at a quick run and gun time limit, but the closing cut “The Cause And Solution” conveys more of an atmospheric doom/death arrangement with it’s 6:53 delivering blood curdling screams, evil early 90’s -like riffs plus hypnotic, clean female background vocals through the mid-section and conclusion.

I’m glad that Despite took a risk in making an album that sonically isn’t pristine clean and Pro-Tooled to death. "Clenched" possesses elements of power groove intertwined with their primary thrash and death style – and yet doesn’t sound cliché or pandering to lowest common form of grab bag riff writing. I can see the underground earth mongers eating this one up and using it as their rallying cry when they desire something away from precise labelling.