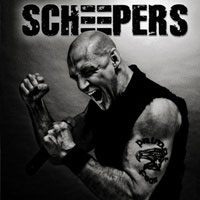 Three years in the making (especially considering Primal Fear’s blistering tour/record cycles), vocalist Ralf Scheepers unleashes his solo album, filled to the brim with traditional power metal and a few surprises. Ripper Owens pipes in for “Remission Of Sin” on a spirited singing duet, Kai Hansen adds some guitar on “The Pain Of The Accused” and you’ll get some guest solos from Metal Mike, Victor Smolski and Alex Beyrodt to name a few.

Ralf experiments with slightly computerized vocal effects and a more Nevermore-ish vibe for “Cyberfreak” while “Saints Of The Rock” has musically more of a Dio-era Rainbow feel while the chorus has American feel good times in mind. He reaches back into his Halford influences for a stirring rendition of “Before The Dawn” – one of the classics from Killing Machine / Hell Bent For Leather and proof that not all ballads need be sugar sweet or sappy.

It’s not one of those solo albums where the artist took a complete u-turn to see how many followers truly love everything he or she creates. Ralf know his roots lie within the traditional framework of classic and power metal, and these 12 songs fall firmly between those guidelines. I wouldn’t say it’s necessarily hair raising material- you’ll get guitar driven metal with his obvious multi-octave pipes leading the way and it’s more in line with his early Primal Fear efforts.

Hard to believe that Ralf’s voice has that sharp sustaining high pitch scream and comfort this many years in the business – but one listen to the 6:18 “The Pain Of The Accused” and you’ll easily hear that 95% of the metal singers wish they could pull off his melodies and phrasing with his ability and talent. Closing with the acoustic number “Compassion”, this whets my appetite for another Primal Fear record.

INSIDOUS OMEN – Anointed With The Blood Of Chaos