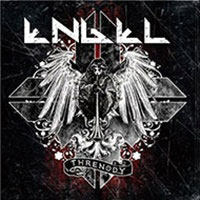 This one took me by surprise. Sweden’s Engel didn’t really swing for the fences with their debut "Absolute Design" as much as attempt to fuse nu-metal with melodic death metal and add in a dash of industrial influence. As a result their debut didn’t have much staying power. "Threnody" comes closer to establishing an original sound- especially with the get up and go blast from opener “Six Feet Deep” and the introduction of acoustics to broaden their easily identifiable sources of inspiration (Lamb Of God, Linkin Park, Soilwork).

The basic Gary Glitter meets Marilyn Manson drum beat running through “Feed The Weak” from Daniel Moilanen loses impact due to a predictable death scream approach out of Magnus Klavborn and uninspired riffing. The follow up “To The End” appears to be Engel’s throwing of the ballad bone, but once again comes off contrived and less than effective compared to their American contemporaries. Other critics praise the sonic qualities of this album, and I would also agree as it’s clean, crisp and full of vibrancy.

The average material outweighs the outstanding songwriting by a 5:1 ratio, as only two of the 11 really entertain me to the point of returning to this album. Maybe the third time will be the resounding fist pump forever for Engel rather than the slight golf clap – but at this point in the game "Threnody" will not get Engel far beyond the 30-40 minute set ranks as it’s very formula-based modern metal without the heart and passion we need from today’s bands.