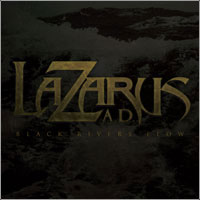 Wisconsin thrash quartet who approach their sophomore album not with trepidation but with an intense focus on quality. They say you have a lifetime to create your opening opus and only a year to get that second record out to consumers – well "Black Rivers Flow" showcases with Lazarus A.D. that knowledge plus action equals a satisfying final product. Spending a significant time on the road across the globe with acts like Testament, Amon Amarth, Unearth, Bison B.C. and playing the Japanese Loud Park festival in 2009 with Slayer, Judas Priest, Megadeth and more certainly should improve your band chemistry as well as give insight to what works well with your songwriting and what needs tweaking.

Both bassist Jeff Paulick and guitarist Dan Gapen share in the lead vocal duties more for this album, and it’s not a case of clean/ screaming division – they both can double up in each department to give songs like “Beneath The Waves Of Hatred” and “The Ultimate Sacrifice” dynamic force. I do think the band have shed their early Metallica and Testament influences from their debut, as you don’t hear as much up and down riff work and obvious stop/ start transitions into the next parts of songs. If anything Lazarus A.D. have taken on more of a southern stomp groove a la Pantera, the rhythms lean and mean on tracks like “American Dreams” and “Casting Forward”.

When the band thrust their accelerator for the 3 minute and change “The Strong Prevail”, you do remember their affinity for many of the faster, Bay Area veterans such as Exodus and Slayer. The board work from producer Chris Djuricic keeps Lazarus A.D. and their sound hard hitting – and mixing/mastering duties from James Murphy assures nothing less than full on metal seeping from your speakers.

"Black Rivers Flow" has that cross pollination music style to see the band gain attention not just on an independent level but also appeal to certain sections of more mainstream audiences into Disturbed or Five Finger Death Punch. Overall, I can see myself enjoying this more and more as the years go on- always the best indicator of its permanent impact.