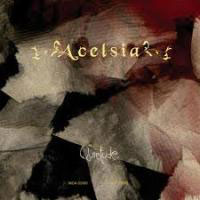 Having recorded in Toproom Studio (Tristania, Theater of Tragedy) and being a metal band with a female lead singer, Acelsia could easily be labeled as yet another band in the Norwegian goth metal scene. This would, however, be a grave mistake. If anything, Acelsia invigorates a genre which has been stagnating for at least a decade now.

You could call this goth, but the music is far more progressive than most of the other Norwegian bands in this genre. The riffing is not far from what In Mourning and Another Perfect Day have been dwelling with the last years. On the compositional level I would say that this is more complex than the typical goth metal band, but still a bit less technical than bands such as In Mourning and their likes.

As for the vocals, this is without a doubt the soul of Acelsia’s sound. Malene Markussen sings with a nerve and style that definitely is her own. At first hearing, both vocals and melodies might appear weird and alternative, but once you get these songs under your skin, they will definitely grow on you. If I had to compare the vocals to anything, it might at times remind me of Amesoeurs, but Markusson definitely has a distinctive and personal sound to her.

Since this is released by the band themselves, I have to give them credit for their product as well. It is as professional as any other release. The cover looks nice and the production is great. If any band deserves to be signed, it has to be these guys…and girl. I am anxiously waiting for a full album release.