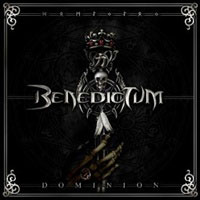 To go forward one often needs to look back – so I feel it’s necessary to take in the previous albums from San Diego, California’s Benedictum before giving my thoughts on this third record "Dominion". Their debut "Uncreation" hit the streets in 2006 and the follow up "Seasons Of Tragedy" in 2008 – gaining massive praise with magazines and radio stations across mainland Europe as well as legions of fans in other parts of the globe. Veronica Freeman has one of those tough as nails voices – undeniably metal and with tons of personality, something I haven’t heard in an American female front person since the days of Leather Leone (Chastain). Musically Benedictum have an affinity for the mid 70’s to mid 80’s acts – certainly with a darker power tone like early Savatage, Rainbow and a lot of the British/German scene.

"Dominion" sees the group expand their sonic horizons with new producer Ryan Greene (NOFX, Megadeth) at the helm. Do not fear – they haven’t lost their heavy guitar bite or Veronica’s nasty, evil snarl. Instead I sense the quintet’s desire to showcase to the world all facets of their songwriting development and knowledge. The immediacy of “Seer” and “Bang” prove Benedictum possess the killer hook and melodies to sustain a listener’s attention and also gain some wider radio/video impact- be it mid-tempo anthem or forceful and rhythmic in nature. “The Shadowlands” dips into their classic metal repertoire – Pete Wells steady Criss Oliva-like riffing and progressive soloing carrying home this arrangement. At 8:54 “Epsilon” opens with crystalline keyboard parts from Tony Diaz before drummer Mikey Pannone and bassist Chris Shrum help propel this epic into early Priest meets Dio-land.

And a big tip of the cap for tackling "2112"-era Rush on one of the bonus tracks “Overture/ The Temple Of Syrinx” – as Veronica’s multi-facet emotional delivery makes this as much a Benedictum number as it is engrained in the heart of all Rush mavens. Many may criticize this group for offering so many shades to their style – but I for one applaud a group of musicians who feel comfortable challenging their listeners and offering a dynamic album that will last decades in the process for pleasure.