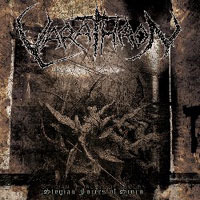 This album is getting older as we speak, and in today’s fastfood materialistic society I guess a review that’s written a couple of years after the album’s release is closer to being words for the historians rather than the metal fans reading this now. Such nonsense aside, Varathron do in fact feel old. The Greek heritage is perhaps one factor to blame and the distinctive Greek sound another. No matter, good music is good no matter when it’s reviewed, recorded and released.

"Stygian Forces Of Scorn" is something that holds up the lever on the 20th spin. The typical fast Greek parts we know from Rotting Christ, Septic Flesh and also Varathron are perhaps the aspect that holds back a bigger rating, but fear not, there’s plenty to digest. Great riffing, a cutting clear gutiar sound, harsh vocals and great use of keyboards and choirs. In contradiction to bands who discover the magick of keyboards and then overdo the whole thing, Varathron manage to keep everything on a level that makes justice to the music. As in, the songs are most important and the additions add spice to the melodies.

Varathron is, to me, one of the hidden gems in the extreme metal scene. Let’s blame that on the wrong choice of labels. But 61 minutes of Greek black metal with loads of good stuff are 61 well spent minutes times 20 and then some.

DEATH – The Sound of Perseverance (Reissue)