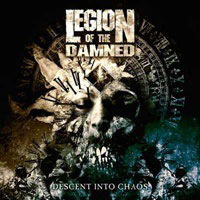 LEGION OF THE DAMNED – Descent Into Chaos

Dutch thrash with death overtones, Legion Of The Damned have been building their trade for quite some time, consistently releasing product and navigating the globe for festival shows and small tours. "Descent Into Chaos" is their fifth studio album in six years- which could send up warning signals to some regarding the quality of the output versus an abundance of creativity flowing. Any worries quickly subside following the title track intro as “Night Of The Sabbath” rumbles with mid-tempo riff shuffling and a drum tempo certain to induce hearty head pounding or fist flailing. The follow up “War Is In My Blood” roars with tight abandon much like the classic triple Teutonic thrash titans (Destruction, Kreator, Sodom), drummer Erik Fleuren comfortable moving from fleet of feet tempos to a more manageable power march.

The raw buzz saw guitar tone through cuts like “Killzone” and “The Hand Of Darkness” gives Legion Of The Damned an attacking, never say die quality to their songwriting and performance. I also love the echo effects a la older Sepultura throughout “Repossessed” – giving the lyrics another chilling element to the speed thrash proceedings. This isn’t a record for those seeking out easier pit-moving grooves or simplified, catchy choruses. "Descent Into Chaos" makes no apologizes for its balance between heaviness and charging guitar/ bass/ drum assault.

Vocalist Maurice Swinkels possesses another discernable delivery with quick pacing, probably aiding the impact of his words in songs like “Shrapnel Rain” and the atmospheric-tinged “Lord Of The Flies” which features some crazy lead parts from guitarist Richard Ebisch. Overall "Descent Into Chaos" for my tastes contains the most versatile set of songs by the band to date – they certainly know how to fly at fast paces but understand you need some mid-tempo and doomier riffing to keep the material retainable and memorable.

2011 looks like another banner year in the thrash movement, especially with this release.

INSIDOUS OMEN – Anointed With The Blood Of Chaos