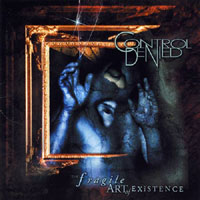 Control Denied is Chuck Shuldiner’s side project where he got an outlet for some of his more melodic ideas that might not be entirely suitable for Death. "The Fragile Art of Existence" was the last recording to be released while Shuldiner still was alive, and it certainly is a proud final moment prior to the tragic end for one of our time’s most unique musical talents.

To make one thing clear, I have to underline that I am a fan of Death’s later releases, and regard the “The Sound of Perseverance” to be my all time favorite technical death metal album. If you like that album you will definitely like “The Fragile Art…” also. Some people might have a problem with the clean vocals, but I find the singer to be phenomenal. I guess you either love his work or hate it.

As for the song structure, melodies and guitar riffing it is not too far from what we got on “TSOP”. There are a lot of rhythm and tempo changes coupled with the typical Chuck Shuldiner riffing. His personal style is just as prominent here as on his releases with Death. If I were to list my all time favorite metal riffs, I would definitely have to consider a handful from this album. It really is that good.

As for the drumming, it is a chapter of its own. As on “TSOP”, Richard Christy is partly responsible on this album as well. His drumming is nothing less than breathtaking. This album, together with “TSOP”, probably contains the most impressive drumming I have ever heard. This album is definitely every metal drummer’s wet dream.

Concerning the reissue, I find the bonus material to be of little value. It is interesting to hear Chuck sing on one demo track, but for the most I found the demo tracks a bit tedious. The sound on the album has been improved though, so it is definitely worth buying for that sake alone. This album always had a tad too much bass in the mix, which originally overshadowed some of the guitar work. On the reissue the guitar is prominent in the mix, and the album finally has the sound I always wished for.

All in all I consider this a timeless classic. It is as good today as it was when released back in 99. If you love Death this should apply to you. If you love progressive metal or even progressive power this should apply to you. If you appreciate great musicianship, innovative music and originality you owe to yourself to check this out. This is a great album which definitely deserves more attention than it has gotten. Simply put; Mandatory.