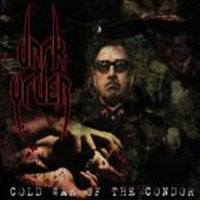 Australian thrash of the furious, old school variety here as Dark Order throw down the challenge to those who think they know what the genre is all about on their third album "Cold War Of The Condor". 8 years between albums, this concept record about the violent and bloody history of the Pinochet Regime during the 1970’s in Chile has equal music accompaniment.

The quartet certainly love their Kreator, Sacred Reich and older Sepultura albums – melding razor sharp speed riffs with militant chant chorus work and rhythms that feel like you are preparing for an endless battle. Guitarist Raul Ignacio Alvarez Garcia also doubles on main vocals, and his delivery is one of the Phil Rind belt it out manner – clear while knowing his strengths and not overstepping his range boundaries.

“Dissension Of The Raptor” sets the tone early with it’s incessant Heathen-like riff technique, both axemen hopping up and down their fretboards like running from prison guards in escape mode. “Tears Of The Exiled” opens with quieter clean guitar lines which build into a fist pumping mid-tempo march with occasional bursts into Metallica-like "Kill ‘Em All" moments. The production doesn’t favor guitar over bass, or drums over vocals- so those who like to hear individual parts will find "Cold War Of The Condor" more in line with the late 80’s/early 90’s studio ethics.

Clocking in at over 76 minutes, there are a couple of tracks that find me hitting fast forward due to unexciting riffs or uninspired drum parts (“Caravan Of Death” and “The Disappeared”) but those of you are willing to handle longer song structures (half the tracks checking in at 6 minutes or better) will be rewarded with boatloads of riffs, tempo changes and melodic, fluid solos.