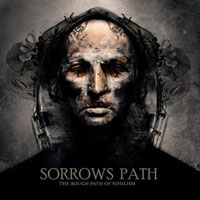 Greece for decades has been a country with a deep, rich tradition for epic, power and doom metal bands. Where they struggled in the past to gain recognition to bring their domestic output to a bigger stage would be in the less than ideal production values. This Athens-Greece quintet started back in 1993, and if you read their biography through their website you’ll wonder how they’ve been able to persevere through the years. Tragic motorcycle accidents, the death of a drummer due to a brain disease, mandatory 2 year military service – plus lineup shuffling – explains why Sorrows Path haven’t released a debut album until now.

They say trials and tribulations make humans stronger because of resiliency. "The Rough Path Of Nihilism" provides the listener with 12 songs rich in the traditional doom approach along with exotic cultural passages and occasional epic arrangements that took my ears and sent me on a magical, mystical journey to another world. Vocalist Angelo Ioannidis has that evil, sinister voice that can sustain notes for days, commanding in a Robert Lowe way through the higher passages and yet can also convey a heavier, darker tone when he chooses to sing in the lower octaves. Musically the band certain love Solitude Aeturnus, Candlemass and Memento Mori – but will often add a Middle Eastern flavor to riffs and transitions such as the opener “All Hope Is Lost” and “Dirty Game”. They also add in an operatic element from time to time while still keeping the tempos slow or at best middle of the spectrum, recalling the power effect of Kamelot in a standout track like “Getting Closer”.

Bassist Stavros Giannakos doesn’t relegate his playing to background status – often providing a progressive complement with  guest keyboardist/producer Vangelis Yalamas on a twisted, heavier cut like “Fetish” that illustrates Sorrows Path maturity and original slant on the normal doom arrangement. The guitar tones have that down tuned, dreary sense of despair that one expects from a classic doom act – and drummer Fotis Mountouris isn’t afraid to mix up straight, slow tempos with occasional bursts of double bass and off-time snare/cymbal action.

What’s scary is I believe the best is still yet to come for Sorrows Path. Let’s hope the follow up doesn’t take another decade to fall into our hands.