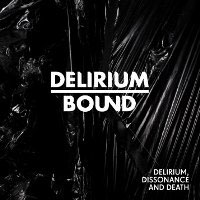 On first listen, “Delirium, Dissonance and Death” reminded me of Satyricon’s more recent output, although played with a looser, more discordant, punkier approach. The overall sound is still metal, but played with an edgy, innovative style. For those tired of acts who prefer following to leading, Delerium Bound should prove to be a breath of fresh air.

The production is light and focuses on capturing every nuance of the chiming, chugging guitars and hoarse vocals rather than opting for power or heaviness. It works, because much of the strength of the band comes from their idiosyncratic guitar lines and song structures that build tension towards a screaming finale. The tone of the music and lyrical content are a close match for the name of the band, conjuring images of intense rage, confusion and hate.

“Delirium, Dissonance and Death” is definitely worth checking out. It is different enough to provide a change for those bored by the seemingly endless parade of generic extreme metal acts. The songs are well put together, with plenty of memorable riffs and catchy refrains. You will come back to this album time after time. On the minus side, perhaps I would have liked to see the band delve deeper into the delirium of their name. It would be interesting to see what a more layered, less pared-back production would bring to the band in terms of tone and atmosphere too, but these are minor quibbles really, and should not be allowed to detract from what is a great debut album.

Standout tracks include "Knifepoint Departure" and "God-faced Dogs", but the album works best played straight through as there are no duff tracks or padding.